Digitization of radio and TV broadcasting

ASBU's activities in the field of audio and TV broadcasting digitization have been characterized by the attention paid to a variety of themes, including, most importantly:

Participation in international radiocommunication conferences and protection of frequency allocations:

ُThrough its participation in international radiocommunication conferences, ASBU contributes to the protection of radio and television frequency allocations to serve the interests of the viewers and listeners

ASBU has actively participated in various regional and global conferences and provided support to Arab corporations: 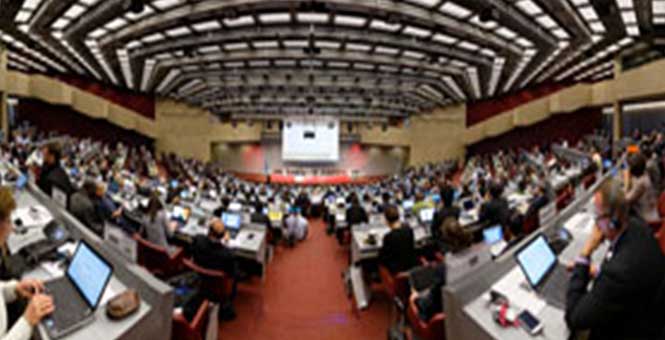 Preparation of the 2019 World Radiocommunication Conference

DVB-T2 / DVB-T broadcasting of SDTV and HDTV continues to develop in the Arab world along with a rise in viewership figures, according to the results of the questionnaire conducted by ASBU on the introduction of the digital TV service in Arab countries. We note that 8 Arab countries have successfully completed the digital transition and managed to develop coverage by rates that range between 85% and 100% of the population. These countries are Saudi Arabia, Morocco, Tunisia, Algeria, Kuwait, Bahrain, Qatar and the UAE. The rate of penetration of this technology with households in these countries ranges between 25 and 55%. The Sultanate of Oman has also started installing 68 DVB-T2 / HEVC broadcasting stations covering 85% of the population in the first phase. Both Jordan and Palestine have begun testing and expanding coverage.

ASBU recommends the introduction of HEVC technology to support the introduction of terrestrial HDTV, with the possibility to broadcast a significant number of channels. It also recommends supporting awareness and sensitization mechanisms for viewers, a good choice of program content, including sports programs so that they can be broadcasted exclusively and promoted through the digital network for higher viewership and a lower cost of the sports rights acquired. ASBU has continued its contacts with Arab authorities and member corporations to integrate receivers with DVB-T2 / HEVC / MPEG-4 systems.

Integrating the ASBU Profile in the DAB specifications

It should be noted that many manufacturers have experimented with the introduction of the ASBU Profile. The preliminary results seem to be encouraging.

Support the development of DAB in the Arab region

ASBU supports the spread of DAB in the Arab region, which has been witnessing a remarkable development as shown in the figure below 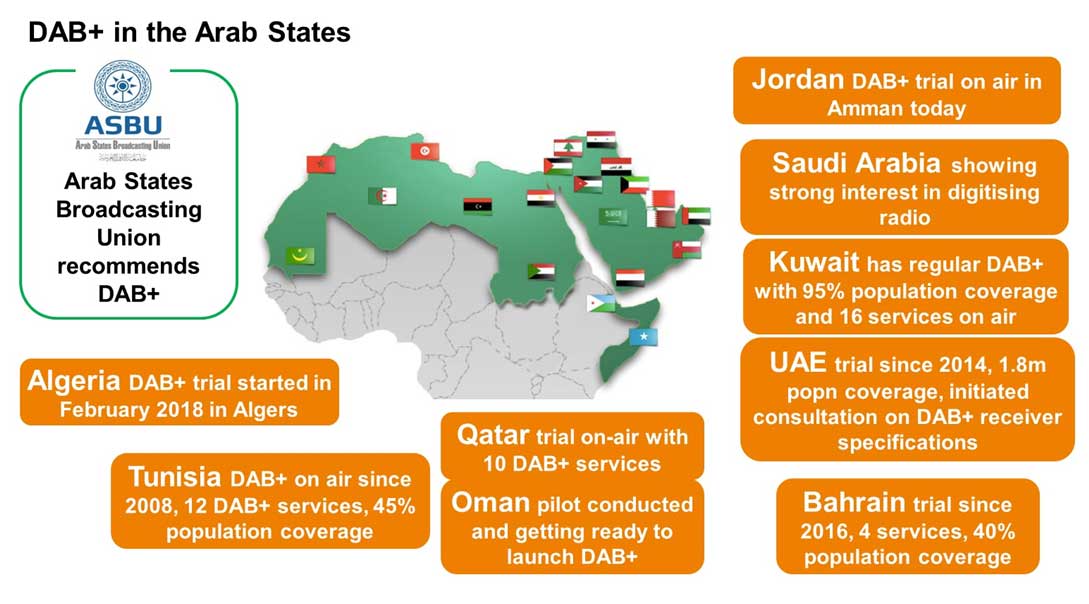 ASBU continues its support for the short wave radio service in light of its many advantages in ensuring communication inside and outside a country's borders. The agreements stipulate the need to protect these services internationally in order to contribute to bringing people together. On another level, shortwave radio is of great importance in disaster situations. This has led such countries as Japan, Russia, India and others to maintain this service while coordinating frequency to avoid any interference between the frequencies used.

The conference, which was organized with great success by ASBU in cooperation with HFCC and ABU in Tunis, was attended by about 70 participants from 32 countries, including 9 Arab countries. The recommendations of the engineering committee were as follows:

Study the arrangements for introducing the mobile TV service

The engineering seminars organized by ASBU follow up the important developments regarding E-MBMS: Evolved Multimedia Broadcast Multicast Service on the fifth generation broadband communication networks (3GPP EnTV), while stressing the fact that this new system's economic model takes on board the TV public service feature.

Today, 21 Arab satellite channels are part of the Arab Unified Global Bouquet. This project, implemented and supervised by ASBU and Arabsat, is one of the biggest joint Arab action success stories in the field of radio and television, in view of the great practical, technical, economic and strategic benefits it achieves for the satellite channels participating in the Bouquet and for the Arab viewer in the different areas covered by the Bouquet worldwide.

The Directorate-General, in cooperation with Arabsat, has contacted Globcast and achieved competitive prices that keep the current cost while the capacity has increased by 100%. This is an important incentive for the member corporations to make the appropriate decision despite having set the budget expenditure.

In terms of IPTV broadcasting, the network continues, through its website (www.glarab.com) to provide high-throughput services of up to 1.2 Mbps and up to 750 kbps with MPEG-4 encoding, as well as provide low throughput at 128 kilowatts. Annual viewing rates were 2.258,000 hours, distributed according to the following regions: